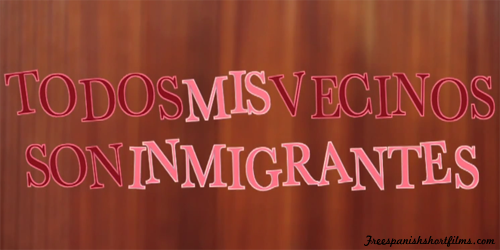 Todos Mis Vecinos Son Inmigrantes features a guy with a colorful group of neighbors – immigrants from all parts of the world. While little (understandable) dialogue is passed between the people themselves, simple gestures like a smile and an open palm speak wonders.

I believe this is relevant in making people understand that, today, the world is truly a smaller place. While it can be hard to communicate with your neighbors, who may be of different cultures, we all do share necessities we can help each other out on. At any rate, the film itself is a simple flick in itself, and it’s pretty cute, too.

(No subtitles for this one on either Vimeo or YouTube, but there’s very little dialogue here anyway. How about watching this short film of a guy knocking on his ex-gf’s door for some reason? Or this short film about a guy that ends up stuck in an apartment?)