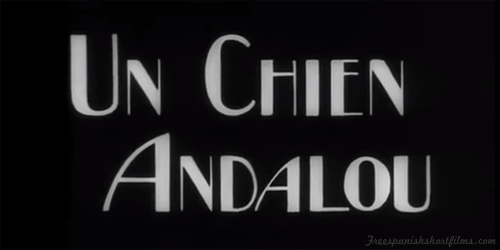 Un Chien Andalou (An Andalusian Dog, in English) is a curious short film. It has no coherent plot, even though it mentions scenes that happened at around “three in the morning” or “sixteen years ago”. It features surrealist elements, and has plenty of conversation-starting situations: a hand with ants crawling out of it, a moth with the symbol of a dead head, and, of course, a razor slitting a live woman’s eyeball.

This is the kind of film art students would study and look at with wonder. For the ordinary viewer, it’s oddly entertaining, though undoubtedly silly. And it honestly doesn’t make any sense at all – which, apparently, what directors Luis Buñuel and Salvador Dalí were aiming for. The Wikipedia page for this infamous short film has plenty of interesting tidbits about it, if you’re curious for more.

(This is a NSFW silent film with English subtitles available. Here’s another silent film about a thought-provoking murder. And here’s a film with plenty of details which may or may not be connected to each other.)