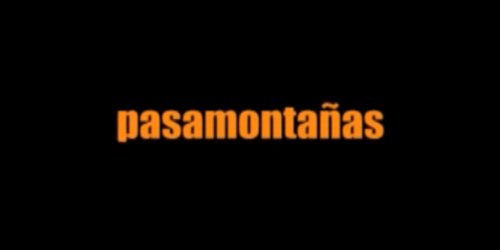 Pasamontañas (English: Balaclava) centers around Rocío, a young girl who enjoys playing with the girl next door and with her uncle. One night, her uncle drops by her house in a hurry to leave, but not before giving Rocío a teddy bear and his balaclava. In the succeeding days, the young girl starts playing new games with her new toys.

This film may center around an unusual gift to give to a child, but it also tackles the simple emotions of a young girl who likes to play games with her favorite people. There’s something about the innocence of youth that provides a juxtaposition to the real things happening in the background: a man on the run, documents and secrets to protect, and a balaclava used for purposes unknown.

I suppose it could be noted here that this film finds its significance in an Argentina set in the late 1970s, wherein a “Dirty War” was being fought between the government and its citizens. (This film is also based on “El Pasamontañas”, a short story written by Marina Kogan.)

All in all, with a few games, a few tears, and a few curious papers, Pasamontañas presents joy and loss as seen from the eyes of a 7 year old girl.

There’s something about the little girl’s travels across the forest’s paths that is unsettling for me, especially when she couldn’t quite keep up with her uncle, who never turns around. What about you? What did you think of Rocío and her games? What do you think really happened to her uncle?

(Pasamontañas is available on YouTube and Vimeo, and with English and German subtitles available in closed captions. Click here for a story about a young girl who wants to prevent a bad thing from happening to a loved one. Click here for a comedic film set at a sad time about helping a man confess to woman. And click here for a feature film about a girl who discovers some things about the country’s Guerra Sucia.)