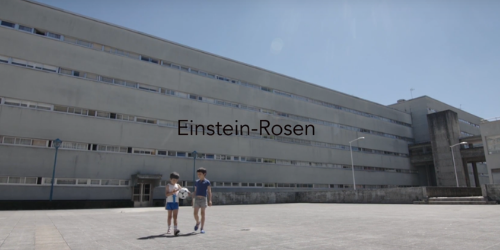 Einstein-Rosen is about two boys testing out a theory about the Einstein-Rosen bridge, which is also known as a wormhole. Will Teo’s calculations prove to be correct this time?

This fun little comedy is surprisingly detailed, with know-it-all Oliver being a hesitant yet dismissive professor to his brother’s crazy theories. However, it’s not too sciencey to alienate audiences, but just sciencey enough to lend it an air of believable silliness. Besides, it’s more than just a science fiction film; underneath its time warp of a veneer, you’ll find that it draws on the brotherly relationship of two boys who grew up together. Speaking of which: I really enjoyed the throwback references made here and there, what with Back to the Future, a Tango España ball, brick-size cell phones of the 80s, and a tortoise named Pepe.

I personally savored this film. Its simplicity is charming, and there’s something precious about watching a young boy enact his crayon-drawn ideas, all written out in a child’s scrawl, too.

(Einstein-Rosen is available on Vimeo and YouTube with English, French, and Portuguese subtitles. Click here to watch young kids caught up in their own world, their own beliefs. Click here for another film referencing Back to the Future. And click here for a feature film about a man who accidentally travels back in time.)