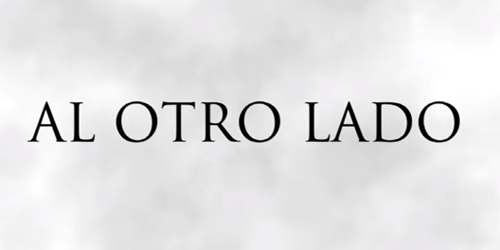 Al Otro Lado (English: The Other Side) centers around Laura, a woman working for Hopeline, the suicide hotline. One day, she receives a special call from Javier, a man who seems desperate about something. She tries to get him to talk about what’s pushing him to self-harm, but the conversation takes a different turn when the man asks her about the other people who made calls to the same hotline.

This film may mostly feature a woman talking on the phone, but the conversation we hear from both sides is really quite intriguing. I honesty felt that tension in this film was slowly being built up, one call at a time. All in all, this film did a good job in showing the trials of working for a suicide hotline, and the agony of being on the verge of self-harm. Oh, the difficulties in wanting to save a life, especially with calls that make or unmake a person.

I have known a few people who have considered self-harm as an option to end their suffering, and it breaks my heart sometimes when I know I can’t help them. I’m glad that there are now services like suicide hotlines and support groups, offline and online, that help people who are considering this path. What about you? What are your thoughts about Laura and her own past? Do you know anyone who is struggling as she is?

(Al Otro Lado is available on YouTube and Dailymotion with English subtitles. Click here for a story of a photojournalist who captures a suicide with his lens. Click here for a man who wants to answer the call in a phone box. And click here for a feature-length him about a man fighting for his right to die.)